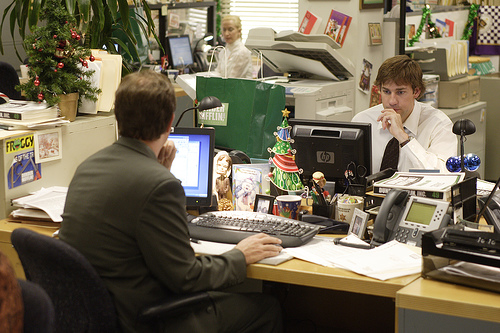 Who would I want my work spouse to be? Who would I want to hang out with all day as an office companion?  John Krasinski of the “Office.”  Otherwise known as Jim Halpert.

Yes, I know that “The Office” is — as a TV show — on its last gasps of life during its final season.

But through the years, Jim as a character has revealed some of the best qualities of an office spouse.  A lot of my office spouses have reminded me of Jim:  loyal, funny, sarcastic, boyish, and mischievous.  I met my first “husband” during my early twenties.  We were both graduate students in the same sociology department and clicked right away.  He had a beautiful French wife, who sometimes met us during our long lunches in the student union during which we’d gossip about all the professors that we worked for.

I met my second “husband” a few years later when I was teaching middle school.  He was also married, and I became good friends with his wife.  He and I would stop by each other’s classrooms all day long, eat lunch together, and go out for drinks on Friday afternoons.  He’d give me valuable dating advice (from a guy’s perspective), and I’d always take his wife’s side when he described occasions when his wife was angry with him.  I had someone to walk with to faculty meetings and who would roll his eyes with me at the same time when a colleague would say something dumb or arrogant.

Over the years, I’ve had several “work spouses.”  And I realize that this is one of the most important things that I miss about working outside the home.  Now the only banter that I have all day is with my cat or dog, and this isn’t quite as entertaining.

I’m already married to a real husband.  We own a house, and we live with our toddler.  But I think I want a work husband.  Badly.  I want to find an office spouse and remarry.   Of course, most on my mind right now is concern about same-sex couples’ right to marry.  But here’s why I’m in favor of everyone’s right to another kind of marriage entirely, one that doesn’t discriminate at all between its straight or gay members:

Work spouses understand the daily and hourly realities of your professional life in a way that friends — and even your real spouse — do not.  They may be working on the same project as you, or deal with and see the same miserable clients.  They know why lunch staff meetings are so ridiculous, and they can offer constructive advice for how to handle a tricky situation.  They’re a safe space to bounce off ideas and get suggestions.

Work spouses allow you to experience single — or married — life vicariously.  For a work marriage to be successful, there can be no true sexual chemistry.   Maybe a little harmless flirting, but that’s it.  As Seth Stevenson of GQ points out, work marriages function best when one spouse is married — or in a long-term, committed relationship — and one is not.  Part of the fun of a work spouse is to hear about, if you’re married, the constant romantic ups-and-downs of dating life.  You get to feel wise and a bit superior, even if you’re probably just as clueless as anyone.

Work spouses are a safe place to complain constantly about colleagues, or anyone.  In my experience, it’s probably best if you and your work spouse occupy the same level in the workplace hierarchy.  You need to be free to bitch about your boss and mock your underlings.

Work spouses are a great way to try to understand the opposite sex, but you don’t have to live with the consequences.  Your work spouses’ habits can just be funny quirks.  So he doesn’t ever clean up his messy desk?  And he doesn’t wash his own dishes?  It doesn’t matter to you.  You don’t actually have to go home with him.  But you can ask him lots of questions about things that guys do that you don’t understand, and it won’t seem like you’re nagging.

Work spouses are also an ideal way to make same-gender friendships.  How?  If your work spouse is married, chances are you’ll end up getting to know his real husband or wife.  And most likely, if you share the same sense of humor and similar tastes in entertainment with your work spouse, then you’re likely to have a lot in common with the real spouse.  Some of my best girlfriends started out as the wives of male colleagues.

An office spouse gives you a boost of self-confidence.  This person only sees one version of you:  the work version, the 9 to 5 version, maybe even the best version.  Your office spouse probably treats you like you’re always together, always showered, wearing clean clothes.  They don’t see you when you’re sick on the bathroom floor with a stomach virus, or shrieking about why the laundry isn’t folded.

As David Owen in the Atlantic magazine, one of the first to popularize the idea of a work spouse, wrote about an “office wife”:

For example, your work wife would never ask you why you don’t just put your dishes right into the dishwasher instead of leaving them in the sink—she doesn’t know you do it! Also, she would never wedge your car between two others in the parking lot at Bradlees, sign you up to be the pie auctioneer at a church bazaar, or grab hold of your stomach and ask, “What’s this? Blubber?” She knows you only as you appear between nine and five: recently bathed, fully dressed, largely awake, and in control of your life.

Did any of you have a “work spouse” or have one now?  Would Jim from “The Office” work for you too?  What about if you work from home?

Thanks to Finish The Sentence Friday!