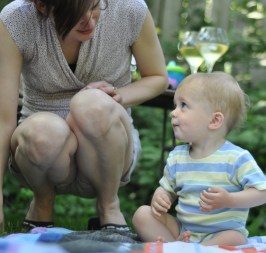 The astounding increase in the number of “older” parents — those in their late thirties, forties, and beyond — has been called one of the greatest “natural experiments” of our time.

There’s been a lot written lately about how the genetic and social effects of older parenthood are not well-understood and could have frightening consequences.  One particular New Republic article written by science writer Judith Shulevitz has gotten a lot of attention.  She herself was an older mom, but her child had mild sensory issues that she wonders could be related to her maternal age.

Clearly, a lot of research will need to be conducted about whether the rise in learning issues, autism and related conditions, and attention-deficit problems are at all related to neurological conditions caused by genetic abnormalities associated with older parents.

To me, this is the point.  Women are just living their lives, and I’m not sure how many of them are going to change their career and relationship trajectories because of a very small — but real — potential that their child may have an increased risk for a condition.

Whenever I read about older motherhood in the media, I am curious about the scientific developments.  But I also don’t think that these biological facts will affect most women’s choices.  Most women don’t “choose” to have a child as late in life as possible.  They are working on their careers, they haven’t found a partner, they don’t feel that they have the economic security for parenthood, or they simply know that they aren’t ready.  And I think all of these reasons can be perceived as positive developments for women, although age-related infertility can be a painful and difficult challenge.

Were you an “older” mother?  Do you regret waiting until later in life to start your family?  What would be your advice to younger women today?