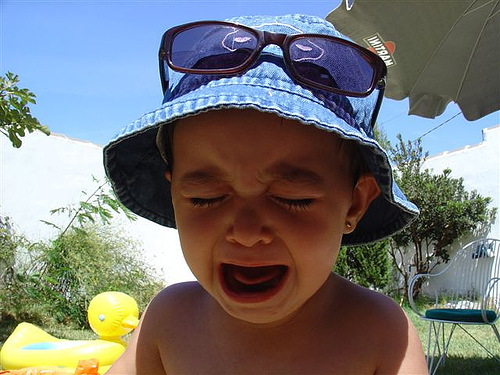 My son left for preschool less than an hour ago, before 8 a.m.  And he had already made clear to me several times how unjust, cruel, and soul-crushing his world is.

The most unfair request that I made this morning? I am a cruel enough mommy to force my son to wear two shoes, as well as socks, to school when it is freezing cold and raining.  For some reason, he did not want to wear two shoes, or no shoes at all; he wanted precisely one shoe on one foot.  That’s it.  I put both shoes on anyway, and he screamed as if he were being stabbed in the chest.

In my calmest, most rational voice, I told him that he would be okay and that he would like wearing his favorite shoes to school.  Then I stood up and walked away, the only effective strategy of dealing with his meltdowns.  My husband was standing there, and we looked at each other — and our writhing, shrieking, son — and laughed.  Immediately, my son got distracted by the neighbors putting out their recycling cans and tottered over to the window to watch this exciting scene with delight.  (His true love is anything related to trash.)

Are we insensitive parents for laughing at our son’s frustration and unhappiness with the world?  I don’t think so, but some parents might disagree with our coping technique.

I’m sure many of you have seen the viral Tumblr “Reasons My Son Is Crying.”  The project comes from a dad, Greg Pembroke, who has recorded many tearful moments in his toddler’s life.  The first time that I saw these pictures of Greg’s son Charlie, I laughed but also sighed in relief that other people’s kids cry for so many irrational and strange reasons.

I posted it on my Facebook page, and a few readers took offense with the whole project, arguing that it was mean-spirited to document and then post for the entire world your child’s saddest and most pitiful moments.  And when I read about the project on the Huffington Post, I saw there were hundreds of parents who agreed with my readers and felt that this dad was exploiting his child and the emotionally vulnerable and tumultuous developmental period of toddlerhood.

Toddlers’ minds are a chaotic stew of new skills, new fears, new expectations, and new restraints.  There are scientific explanations for why your toddler is constantly freaking out.  (Another great collection of reasons for toddler grievance?  Comedian Jason Good’s list of 46 Reasons My Three Old Might Be Freaking Out.  Among the reasons?  His yogurt won’t stay on the spoon.  The cat won’t let him touch its eyeball.)

Melinda Wenner Moyer wrote a terrific piece in February about why toddlers have meltdowns.  Honestly, I don’t think two days have gone by without rereading the whole thing or consulting it or sending it to a parent with a toddler.  This piece explains simply and clearly the difficult realities of the toddler brain.  According to Moyer’s research, there are a whole list of factors that contribute to toddlers’ predisposition to tantrums: their lack of language skills, their inability to label emotions, their underdeveloped working memory and self-control, their inability to understand cause-and-effect, their lack of patience, their failure to grasp timing.

So does all of this mean that we parents who find regular humor in our child’s emotional struggles are cruel?  Should all of us just put away our cameras or our keyboards and just sit and empathize with our screaming bundles of rage?

The hardest thing about being the parent of a toddler is that his behavior seems so outrageous and I feel like I may be raising  the only toddler in history who has been this difficult.  I’m constantly thinking, “This can’t be normal.  Really, it can’t.”  After a ten minute screaming fit in the middle of a crowded sidewalk because a store was unexpectedly closed.  After he uses chairs to climb onto the dining room table and attempt to swing on the chandelier and then has a fit when I won’t let him repeat that feat.

For a parent and the child, it’s exhausting in every imaginable way.  For me, it truly helps to have a sense of humor about these constant meltdowns.  It helps to have someone to laugh with and to know someone understands.  I don’t think this is exploitative of the child, even if you choose to share your child’s tantrums with the world.

According to Pembroke, he and his family — after their morning show appearances and media celebrity during the past week — have become overwhelmed by unsolicited advice from other parents about how to get his son to stop crying.  However, he says that his son — like mine — just has fleeting, intense tantrums and is generally a pretty happy kid.  That doesn’t surprise me, and I’m grateful to him and his dad for helping us parents of toddlers not feel so alone.

What do you think?  Do you think that this sort of media exposure of a child’s most difficult moments is exploitative?   Do you feel guilty laughing at your kid’s tantrums?