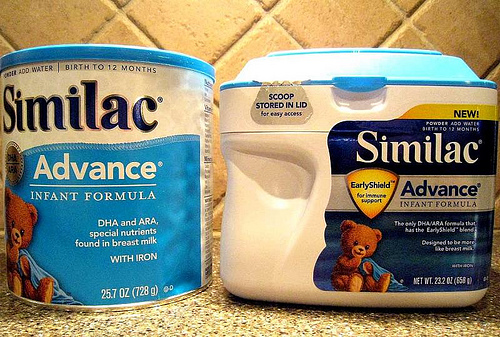 This weekend I received a thoughtful message from a reader, Kathy, who had been thinking a great deal about what she’s read during the past week.  She responded to my post about “the breastfeeding wars” and Similac’s Strong Moms campaign to stop moms from judging each other.  Kathy had previously shared her story about breastfeeding guilt, “Your Road to Mommyhood is Your Own” on Suzanne Barston site, Fearless Formula Feeder. Read her thoughtful response and let me know what you think.

I had a real revelation when I was reading the comments about the Scary Mommy post “15 Things They Don’t Tell You About Breastfeeding” and the Twitter feed last night from the Similac Strong Moms campaign. There is an interesting common thread that a lot of breastfeeding advocates are mentioning:  that this type of post from Scary Mommy is not humorous but instead actually fear-mongering and that it could sway a person who is on the fence about their feeding options. This wasn’t just on your site.

I started to find it insulting that people really think that we, as women, in this day and age are so sheltered that we might be swayed by a humorous blog post that we would actually base a life-altering decision off of it.

At the end of the day though, I truly find this entire war to be incredibly bizarre. Mostly because I am positive that what we actually want, our long-term goals, are exactly the same as parents. If I could say anything to every mom that I know, both online and in-person, it would be this: Go spend time with mothers that are not like you. It doesn’t matter how you choose to do it. But spend some time with a group of mothers that DON’T believe what you do. You might be astounded at a) how much you have in common. And b) why they feel the way they do.

I think the biggest hindrance in our community is an unwillingness to learn, which is ironic because we as a culture seem to be very into education, and it’s the benchmark of advocacy on any side of the parenting fence. But we not only need to learn correct, unbiased facts and figures, we need to learn about each other.

You mentioned “cognitive dissonance” in your post about Similac. I realize that this is where the biggest obstacle comes into play. I’ve experienced it myself recently, in a big, big way. I decided to step out of my comfort zone, and wrestle the old bear, “cognitive dissonance,” head on. I had no idea what it was called at the time, I just called it “that oogy feeling.” But you are right, you literally feel lost, you IMMEDIATELY feel defensive. And it feels… wildly uncomfortable. It feels scary, you feel like you may be throwing everything you believed into question. But the deep, deep dark secret is that that’s not what happens.

Instead, it’s seriously been the best thing that I’ve ever done for myself as a mother, because it’s given me a whole different perspective on myself as a mother, and it’s helped me to understand things that I genuinely didn’t, both emotionally and mentally.

In every community that I’ve stepped into there is a recognition that judgment is terribly toxic, in any scenario.

Oddly though, this war seems to rage hotter and hotter, even with a lot of chatter about how toxic judgment and negativity is in our community. And most sadly, even something like Similac’s Strong Mom campaign, a campaign that is an anti-bullying campaign, can’t seem to get our community as a whole to drop their gloves and hug it out.

This, for me, has been honestly one of the most baffling few days. I thought, surely, if anything can get us to hold hands, even for one second, it would be this. Something that focuses on the mother, and something that discusses BULLYING, a subject that is on the forefront of any parent’s mind in this day and age… Nope. I read through these comments and the feed over and over, trying to understand, trying to see the common thread, the basis, trying to make sense of it, and I truly couldn’t. I could not reconcile the absolute vitriol that was being doled out like Halloween candy.

I think that the most vitriolic segments of our community, whether it be hard-core lactivists calling formula feeders lazy or saying they should have never been parents, or formula feeders calling breastfeeding advocates Nazis, all words I’ve heard or read multiple times, and all unacceptable rhetoric.   I think that it’s driven by exactly what you mentioned. It’s cognitive dissonance. It’s that sense of fear, that scary place that we end up in so often when we have opposing viewpoints being thrown at us.

But here’s the final common thread amongst all moms that I’ve engaged, breastfeeding and formula feeding alike, and by far the most important. We’re all scared to death. We’re scared OF death. We’re scared that we’re doing the wrong thing. Even the proudest, most “secure” Mom has experienced that, and that fear of doing irreparable harm to our children via some choice or action that we’ve taken.

And I think this is where unbiased education becomes incredibly, profoundly important in our culture. And that’s where I think you come in. We need unbiased education. We need to feel that there is equal footing that is not based on philosophy, but on real information. It’s going to be slow, as Suzanne Barston has talked about on her blog, Fearless Formula Feeder… but the only way for us to start to work around this is for people to realize that we have FAR LESS to reconcile, to experience dissonance about, than we have in common. The common ground is actually much wider, flatter and more inviting than we think it is.

We all experience this, this is something that has no demographic qualifier.

Strong Moms has it right. We need to stop bullying. But in order to do that, we also need to stop thinking that we’re all so damned different or that our style of parenting is actually that important. The style is just a vehicle that takes us all to the same exact place.

How can we promote more understanding and tolerance between mothers?  Do you think that Kathy’s right about the possible solution:  spending time with mothers who are different than you?  What are your thoughts about Similac’s campaign?

Here is one thing that moms can do:  Take the Mom Pledge.  It’s an online campaign to create a supportive online environment for moms.  I’ll be writing more about it later in the week….