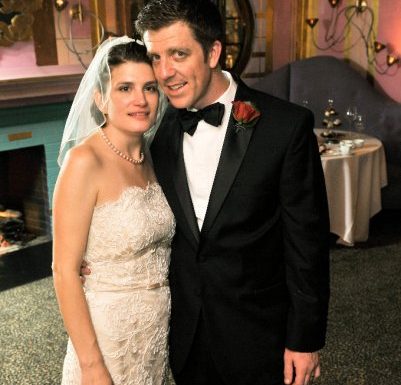 Like so many other parts about family life in the 21st century, women are deciding that they want the benefits of all potential choices. They want to work, have fulfilling professional identities, and yet still have a rewarding family life.

It’s not news to anyone that women — as well as men — often feel pushed and pulled between many identities. You might feel like you have your work “self,” your “mom self”, your “old friend” self, your “play date” self.

Even though this phenomenon has impacted me directly, I hadn’t thought it much until I read yesterday’s New York Times piece “The Problem That Has Two Names” about one physical manifestation (on identification cards and invitation lists) of that identity struggle. The piece is about one editor’s inability to decide whether she wants to go by her maiden name or married name. She describes herself as in some sort “in-between purgatory.” She writes:

Like others wanting it both ways, I held on to my professional name while also taking on my husband’s. For years, I’ve gone by both, fearing that at some point I will be called out or, worse, arrested. Though I moved my last name to my middle, this has left me in a muddle: Under what name do I travel? Who pays taxes? What if I, er, still haven’t switched over my Social Security card? These are questions that for 10 years I’ve been unable to answer.

Those questions are starting to sound familiar to me, as they are a growing number of American women. As women wait longer and longer to marry, they have professional lives and identities that are well-established before marriage.  About 35% of American women are now choosing to keep their names, but not as a feminist statement.

According to a recent Salon article summarizing this trend, “What we’re seeing in America is that the older the bride, and the better her job, the more likely she is to keep her name. In the long run, that’s probably a good idea for her career (that’s $472 a month).”  That’s because women who keep their maiden names are viewed, on average, for whatever reason, reason as “less caring, more independent, more ambitious, more intelligent, and more competent” and earn more money on average each month.

I certainly wasn’t thinking about my pay check when I made the decision to keep my name.

In my women’s studies classes at Wesleyan in the 1990s — so much the height of “political correctness” that there was actually a movie that came out while I was there based on the writers’ experiences there called PCU — if I had ever announced that I planned to take my husband’s name upon marriage it would have been regarded as equivalent to submitting to Chinese foot binding.

Over the years, I hadn’t given all that much thought as to whether I still planned to keep my maiden name for the cause of feminist principles. Then as I hit my thirties, and friends started getting married, most of the them changed their names to their husbands’. But I knew quite a few others, living in a town like Cambridge, Mass., who did keep their own names. When I got engaged on my 35th birthday, I was surprised by my own mixed feelings. Suddenly, part of me started to like the idea of both of us (and our future children) sharing the same name.

So I asked around. It turns out that my friends — despite what their e-mail addresses or Facebook account claimed — were playing a complicated dance with their names. Many hadn’t changed them legally at all. Others did still use their maiden names professionally. Some were trying to use both names together.

So I did nothing. By default, I kept my name, figuring that in grad school and in academia, that would be easier anyway. I could revisit the decision in a year or two. And then I got pregnant within a year and we moved to Buffalo. I had too much on my mind to think about these big existential matters — who am I really? who do I want to be? — as well as deal with the bureaucratic hoops of social security offices.

Now I live in a town where my husband’s family has been for generations. It’s not nearly as common for women to keep their maiden names as it was in progressive Cambridge. When we go to parties or events, I’m often given a name tag with my married name. I’m introduced with my husband’s name.

And rather than start to give a lecture about patriarchy and feminism, as I would have in my early twenties, I just smile and shrug.  Because don’t all of us have all sorts of different identities?

I like having a separate last name as a blogger than my husband and son. I feel a sense of independence and freedom that their public anonymity seems to allow me. I do like keeping the connection to my own family past and to my dad, who passed away nearly ten years ago.

But I find it frustrating when I have to explain that my son’s name is different than mine.  And I worry that my son will find it confusing too. So, all in all, I’m no closer to a definite decision about names and identities than the day I got married.
How did you decide on your last name after marriage? Are you happy with your choice?