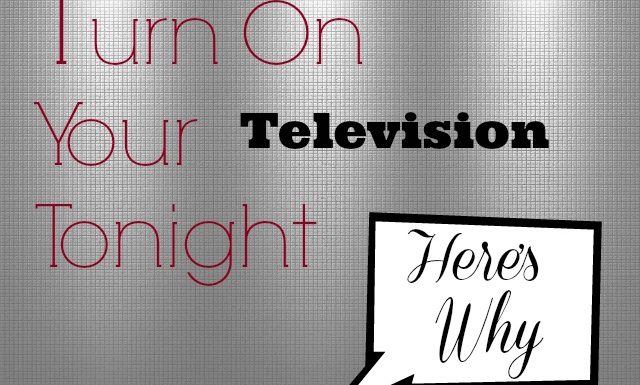 “We don’t have a television.”

Last weekend a thirtysomething guy said this to me at a dinner. I had just asked one of my new ice breaker questions when meeting new people: “Do you watch Breaking Bad?”

Out of politeness, I didn’t say anything back. I resisted my desire to roll my eyes at this guy’s smug tone, but I’ve been thinking about a suitable response for days.

Here’s what I think: If you’re not watching television — when there’s so much amazing television out there — you’re really missing out and I feel a bit sorry for you. In fact, I would argue that you’re missing a chance to become a better parent and spouse, a happier person, a better writer, an engaged critic of popular culture, and an informed and compassionate citizen.

What I’m talking about is Quality Television, what I will call QT. It’s usually drama, but not always. It has writing that moves you, that sometimes leaves you breathless, and always makes you think. It has plots that are complex and roll out over many episodes and sometimes seasons. It has characters that you connect with, that you either love or hate passionately. It’s a TV show in which episodes end and you’re either crying, sitting in stunned silence, or feel intense joy because it’s tapped into a part of yourself (as a parent, sister, brother, friend, child) that makes your heart sing.

And here’s why you should be watching more QT:

1. It will improve your marriage or relationship with your partner. Since we became parents two years ago, my husband and I always have a “show” that we watch together. Parents of toddlers don’t go out much, but we both look forward to entering a world that we both love. At the end of dinner, when our son is finally asleep and we’re both brain dead, one of us will say to the other, usually coyly, as if we’re suggesting something far more explicit, “Is it show time?” Then we’ll watch an episode of our show. And after it’s over we’ll always talk about it, often for days. Right we’re on the third season of Breaking Bad, and sometimes it will take days for us to dissect an episode, arguing about characters’ motivations and ethical stances. Honestly, I’ve learned so much about my husband and our shared — or not shared — values by talking about the dilemmas and characters in shows like The Wire or Breaking Bad.

2. It will help you stay connected to friends and family far away. If you’re like me, many of your relatives and closest friends don’t live nearby. It’s hard to keep them up to date with what’s happening in your life on a daily basis, and it’s easy for months to go by without any connection. But many of my relatives and I have found a way to have something to talk, laugh, and tease each other about: The Walking Dead. We all watch it, and have Facebook discussions all the time about the show. Similarly, QT can be a way to keep cross-generational connections. All of us sometimes feel that our parents or older relatives live on a different planet; talking about good TV can be a way to bridge that gap.

3. It will help you connect with humanity. That sounds a bit lofty, doesn’t it? But I used to be a political junkie. During the 2008 election, I read and watched about the campaigns incessantly. I loved Sunday talk shows, NPR news programs, even weekly news magazines. While I still know generally what’s going on in the news, I feel that I understand contemporary society better by watching QT. I learn about the lives of people who are very different from mine. Important sociological questions and the greatest social issues of our time are addressed on these shows — crime, drugs, political dysfunction, failing schools — but in a way that makes you learn by feeling, understanding, and sympathizing.

4. It will help you be a better writer. For those of us who like to write, the writing on these shows is incredible. They will make you think about characterization, metaphors and allusions, great literature, techniques for surprising your readers, symbolism, and great dialogue.

5. You will enter a separate world outside of diapers, homework, baby formula, and temper tantrums. Yes, it’s escapism. Pure and simple.

If you aren’t watching QT, here’s a starting guide for where to start. All of these shows are outstanding in quality, but I’m listing them in order from most accessible, lightest to darker, more complex shows. You can start with the easier shows, or just jump right in with the intense and challenging. I’m also including only shows that I think would appeal to both genders. (For instance, one of my favorite shows of all time that I would include as QT is “My So-Called Life.” My husband has no interest in it.)

1. Friday Night Lights: If you have not seen this show, go straight to your library and pick up the first season. Now. If you do not like this show, I’m afraid you may have no soul.

2. Mad Men: Yes, it’s worth the hype. Some seasons are stronger than others, but it’s always addictive.

3. Battlestar Gallatica: Not sure if this show is for everyone. It’s a space drama that’s really about morality, politics, and faith.

4. Damages: I watched the first season and liked it. I’ve heard that it gets very addicting.

5. Homeland: An explosive and addictive show. I worship Claire Danes.

6. The Walking Dead: My favorite zombie, postapocolypse drama of all time.

7. Breaking Bad: After a terminal cancer diagnosis, a high school chemistry teacher makes meth to support his family and becomes a leader of a drug empire. Astoundingly good.

8. The Wire: Some may say that it’s the greatest show ever aired on television. I’m not sure I’d go that far, but I can guarantee that you’ve never seen anything like it.

What have I missed? What would you add to my list? What do you watch?