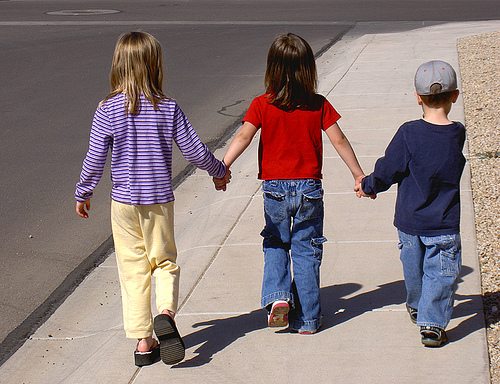 How do guide our children in overcoming learned helplessness? How do we encourage independence in our kids? I have a teacher confession: As a fifth and sixth grade teacher, long before I had kids, I would often do my students’ “classroom jobs” for them.

I know that sounds pretty pathetic.

If you are the parent of an elementary or middle school student, you may have heard of job boards. On a bulletin board, all sorts of jobs are listed — from Class Librarian (in charge of putting back classroom library books) to Paper Passer (in charge of passing back papers). There are enough jobs for each kid, and students rotate through them.

In theory, I supported the idea of these jobs: they would help teach kids about responsibility, build a sense of community in the classroom. However, I was also a bit of a control freak about my classroom, and ten year olds are not known for completing all tasks completely and neatly.

So I would just do it myself. If the classroom library got into disarray — if the titles were no longer sorted by genre and then in alphabetical order the way that I wanted — I would fix it. Most of the time when I wanted papers to be put back into folders properly, I would do it myself. I would even stack the chairs myself because I wanted it done a certain way.

I started noticing that other teachers did not do what I was doing: micromanaging the classroom.

My teaching partner, a man in his fifties, left his students in charge of all the errands and tasks in his classroom. The class made a big deal of learning all the jobs in the beginning of the year.  Later in the year, sometimes his classroom library was a mess. Or the juice wouldn’t be returned to the kitchen after snack. But he didn’t do their chores for them. Instead, he tried to give consequences for neglecting responsibilities.

So the next year I gave up a little control. And the kids started to take their jobs seriously.

Parents throughout every culture have the primary responsibility for teaching responsibility to their children. Even before I became a mother, I realized that a lot of parents were struggling with how to help their children advocate for themselves or face challenging situations.

During my teaching career, there was the parent who would call and demand a conference about my new seating chart that placed her daughter next to a child with mild autism. She wanted her daughter moved because her daughter found his rocking to be upsetting.

There was the parent who actually drew and gave me her own diagrams of where she wanted her child to sit in homeroom, as well as in every class during the day, from art to computer class.

There was the parent who hid in the bushes (taking notes) during recess because she wanted to keep track of who her son played with at recess.

There was the parent that I found after school going through my classroom waste basket because she was looking for notes that another student may have written about her son so that she could call and confront the other parent.

Nearly every day there were parents who called to give me reasons why their child couldn’t complete their homework and shouldn’t be penalized (up too late at a sports game, visiting relatives, extra homework in another class).

I would never place the blame entirely on parents themselves, especially now that I’m a parent myself and understand the sorts of cultural pressures we face.

For example, schools and other parents make it difficult to allow kids to have the sorts of responsibilities that children do in other cultures.

At my old school in Cambridge, in a lovely, safe and low-traffic neighborhood, even kids in fifth grade had to be walked home by an adult, even if they lived on the same street.

The first time I was told this, during my first days of teaching there, I laughed. Could that possibly be right? Ten or eleven year olds can’t ride home on their bikes when they live a few minutes away? Quite a difference from my own childhood when, even as a first grader, I walked home about a half mile by myself, and no one thought it was remotely strange.

When my son was a toddler, I would find myself in the same bind that I did as a beginning teacher setting up chores for my classroom. For instance, I knew that even as a toddler, my two year old could start helping out a little bit, carrying his own little backpack or putting away a few of his toys.

But it’s just so much easier to do it yourself. So I would feed him his dinner instead of letting him feed himself. I would carry him too often because it takes too long for him to walk down the street himself, as he stopped at every pinecone and every bush and tree. I brushed his teeth, instead of letting him do it, because it’s faster and easier and I was exhausted from feeling like I was doing everything.

1. Do not make chores optional.

You are not doing your kids any favors by keeping them from work. Children are naturally and universally eager to help out when they are very young. But this changes as they get older. As Christine Gross-Loh says in her book Parenting Without Borders: Surprising Lessons Parents Around the World Can Teach Us,

“But when we ignore our children’s eagerness to participate when they are younger, they internalize the idea that contributing is unimportant and that they are helpless. They also begin to expect that things will be done for them.”

2. Give your child clear expectations about how they can help out the family.

Teach your kids clearly that they will be expected to take care of their own things. Kids will need a lot of reminders, patience, and guidance when they are little.

3. Be age-appropriate in your expectations, and allow older kids to take care of younger ones.

Other cultures understand that shared caregiving is an important way of teaching self-reliance and nurturing.

In other cultures, from Europe to Central America, they expect more from their children physically, Gross-Loh points out, but do not overestimate what they are capable of intellectually. (Apparently — gulp! — in other cultures, kids don’t experience the dreaded “Terrible Twos,” which we know all too well in my household.) They are treated with kindness and patience, with the understanding that they will understand rules and mature as they get older.

Meet your kid at his own developmental level and make sure to realize that not all kids are the same and have their own unique abilities and challenges. 4. Let your kid get around by herself as much as possible.

Not only is fresh air, activity, and exercise good for children, but children learn confidence when they are allowed to go from place to place on their own.  Honestly, some of the most magical moments of my elementary school years were those 15 to 20 minutes when I walked home with my little brother. We could choose to cut through the woods, running home through the trees. We could choose to take the road. We could chase each other and play tag all the way home. Most of the walk home was up a steep mountain, and we could run up the mountain without even needing to catch our breaths.

Across the world, children walking home from school is a normal sight to see on a weekday afternoon. In Japan, for example, very young children are taught in school about how to be safe during their walks to school. In all cultures, it is expected that kids need practice and guidance to help them be more independent.

Let your child know that new tasks and responsibilities are hard, and show that you understand how they might be feeling. Explain why this new independence is important. Something as simple as, “I know it feels frustrating when you worked hard on your homework but forgot it at home. I can’t always be there to help you out in situations like that, and I know that feels hard.”

What are ways that you teach your children to be responsible, helpful, and independent? How do we as parents participate in a culture of overcoming learned helplessness?