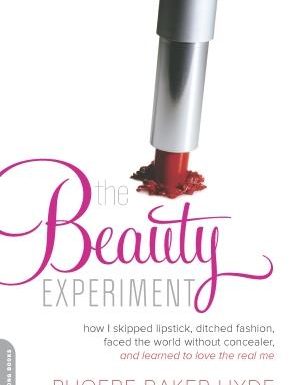 When I was asked to review The Beauty Experiment: How I Skipped Lipstick, Ditched Fashion, Faced the World without Concealer, and Learned to Love the Real Me

by Phoebe Baker Hyde, I read about some of the exercises that the author suggested for reviewers to try along with reading the book. Then I laughed smugly. Eliminating beauty crutches and not looking in the mirror to check my appearance? This was going to be so easy, I thought.

The memoir itself, this woman’s story, fascinated me; I particularly liked the way it was structured, switching between scenes of her life several years ago in Hong Kong, her present life in the U.S., and her own research and survey results about women and their appearance.  But attempting my own beauty experiment? As a mom of a toddler whose daily wardrobe consists of leggings and yoga pants (many with holes), fleece hoodies, and Uggs, I figured this would be about the most effortless experiment that I’ve ever undertaken. (Sort of like the vow that I made to myself during pregnancy to eat ice cream every evening….) I’ve put on makeup probably about twice during the entire Obama administration, and the only thing that I do to style my hair is wash it and comb it. I hate wearing jewelry and only wear my wedding ring. I’ve gone weeks before realizing that I haven’t plucked or shaved a single hair on my body.

I’m neither ashamed of my lack of beauty and styling routine nor am I proud of it. It just is. It was never intended as a political or personal statement against exacting and unfair societal beauty standards for women. It was never an abrupt decision that I made, like Hyde’s decision, which for her involved highly considered contracts of what she could and could not wear, put on her face and body, and buy for herself. Mine was a slow process of simply not caring anymore and not wanting to invest the time and energy in something that did not mean anything to me or seem enjoyable.  In short, it was a simple, daily, rational calculation of costs and benefits. (Cost=spend an hour blow drying and styling my thin, fine hair to look full of volume, benefit (for me)=zero, since no one besides me would notice or care.)

It wasn’t always like that. After college, in my first jobs as an editorial assistant and researcher and then as a teacher, I used makeup to make me look older and more professional. It became a mask that I put on every day so that I wouldn’t be mistaken for a high school kid.

For Phoebe Baker Hyde, getting to that place of not spending much emotional or physical time on appearance was a much more difficult process. She was at a very vulnerable point in her life — a new mom living abroad in Hong Kong (away from her family and friends) with a husband who worked long hours and traveled frequently. I could relate to so much of that. When my son was a few months old, we moved from Cambridge, MA (where I had lived for over a decade) to Buffalo, my husband’s hometown where I knew no one besides my in-laws. I hadn’t yet finished my dissertation. While my husband loved his new job and was feeling fulfilled professionally, I felt adrift and depressed about what I was going to do with myself.

For me, those feelings manifested themselves in a lot of anxiety and moodiness as well as insomnia. For Hyde, she sought refuge in buying a fancy dress or picking up the latest skin treatment or lipstick. When those crutches no longer worked, she did something radical to change her relationship to beauty standards and her feeling of being at war with herself: stop using makeup and jewelry, buying new clothes, getting salon haircuts.

Even one of her friends astutely tells Hyde, “This strikes me as being more about your marriage, or motherhood, or work issues than just your appearance.” And this experiment was about all of those things, as well as one woman’s relationship to her own body.

And it turns out that I’m not so immune to societal messages — and the voices within my own head — about how women should look and age. Shortly after receiving the book I had an appointment at the salon, a new salon where it took weeks to book an appointment. I had already planned to cut my hair short. I did this every few years, and I was growing tired of my toddler pulling on my hair and trying to rip out my ponytail holders.

Normally I get my hair colored as well with my very infrequent hair appointments. (Or sometimes I colored it at home.) I didn’t care about the color; I didn’t want fancy highlights or treatments. The only thing that I was interested in doing was covering my grays. I only colored my hair a few times a year, just when the grays would become visible enough that it started to make me anxious.

That’s it! I realized when I got the confirmation call for my appointment. That’s my beauty crutch! I do not want anyone to see my roots.

When I do look in the mirror, the first thing I look at is the part of my hair, where I know all my grays are. When I see them, especially in the sun, they truly upset me. I hate them. I know I’ve been blessed so far as a brunette in terms of finding gray hairs. (Many people in my family get a lot of gray hair in their twenties.) It’s six months until my fortieth birthday and I only have gray hair in one place on my part. But it’s noticeable, probably not as noticeable as I think they are. I’ve starting realizing that I avoid cameras when my hair hasn’t been colored in a while.

This book made me think about my anxiety over gray hair and where it comes from. In theory, I know that many women look quite fetching with gray hair. For me, I think gray hair represents something much bigger. It means that I’m getting old, middle-aged even. Well into my thirties, I was still being carded at liquor stores. When I was in graduate school, people often mistook me for an undergraduate. But with my big patch of gray hair… no one’s going to think I’m a college sophomore.

So I didn’t color my grays. Here they are:

Okay, maybe in this light, they’re hard to see. But I promise that they’re there! I’ve been tempted many times to buy a box of hair dye at the drug store since my appointment several weeks ago but stopped myself. I’m not entirely sure why. Maybe I’ll get used to my grays. I’m giving myself the time to think about it. I’m giving myself time to think about what those gray hair represent to me: an older version of myself. I’m not young anymore. I’m not old either, right? That should be okay, but it’s not. In my head I still picture myself as a 25 year old: no wrinkles, no gray hair, no c-section scar, no weird hairs on my chin.

What started out as a fun read and a breezy “experiment” in trying to find a single beauty crutch that I still possessed turned out to make me think more deeply about my own lingering hangup and fears of aging.

I encourage you — whether you’re a woman who can’t conceive of a trip to the grocery store with a full face of makeup or a new mom whose entire wardrobe is stained with puke — to read the book or to check out Phoebe Baker Hyde’s website and learn more about her experiment. You may not think about your next makeup or clothing purchase in the same way again.