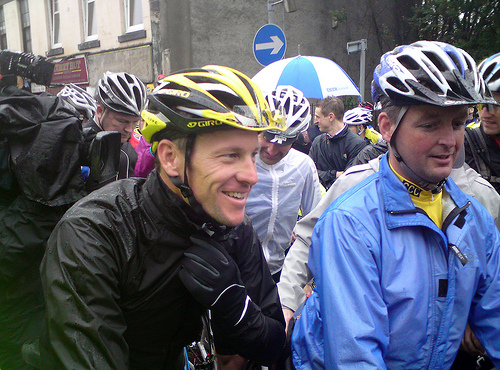 This post has been selected as a front page feature on Divine Caroline.

All of us have been horrified by Lance Armstrong’s arrogant “apology” for his cheating to win his cycling titles. His lack of self-awareness and clear calculation during his interview with Oprah no doubt will do nothing to repair his image in sports or American popular culture. Has there ever been a hero to so many who has fallen so far and displayed such breathtaking levels of unlikeability?

I was a teacher during the time of Armstrong’s most impressive accomplishments, not only the Tour de France but also his advocacy for cancer research and humanitarianism. For the kids in middle school that I taught, he truly was a hero, and they wore his arm bands with pride. I listened to many class presentations during our biography unit in English class about Lance Armstrong, and he was someone that teachers felt comfortable bringing up in class discussions about character strengths.

So what do we — as parents and teachers — say about Lance Armstrong now, whose lack of courage was on display this week for the whole nation to see? For me, the answer is easy. I’m not teaching in a classroom anymore, and my kid is just a toddler who can’t even say “bicycle” yet. But I also think that we also have been given a chance to think about and clarify the values and habits that we want to pass onto our kids and students. And you never have to mention Lance’s name, ever, if you choose, as a model or cautionary tale.

1. Cheating will always catch up to you. Even if you don’t actually get caught, you’ll know in your heart. I think that as parents we often stress the external consequences of cheating — punishments — but don’t talk as much about how cheating corrupts your soul. Talk with your child honestly about times when you did something you later regretted, not just because you got punished or hurt other people, but because you felt guilt and shame at letting down yourself. And if you do want to mention Lance, use his epic tale of deceit as a way of giving a concrete example about a person whose entire life — his friends and supporters as well as his fame — has crashed down around him. As blogger Amy Graff has pointed out, we as adults are sometimes forced to use “lame, unconvincing” examples — “If you steal a piece of candy and I catch you, then….” — when talking about cheating and deception with kids. This is about as vivid as it gets.

2. The real heroes in our world are not celebrities or sports stars, no matter how impressive their feats or how many Twitter followers they have. As a teacher when instructing my students how to write and read biographies and memoirs, I wish that I had asked them to write about ordinary people doing extraordinary things. Instead, nearly every one of my students wrote about famous people, mostly sports stars and entertainers. I wish that I had asked my students to interview real fire fighters, teachers, doctors, and nurses who have faced adversity and now devote their lives to making others’ lives better. Talk to your kids about these real people in their daily lives — and use that word — “hero” so kids understand that you don’t need fame and fortune to deserve that title.

3. Every one has flaws and character weaknesses. It’s how you admit those flaws that determine your strength of character.

4. Allow your child see you being generous and forgiving, even to those who are mean or have done you wrong in some way. The most disturbing part of Lance’s story to me is how he went out of his way to hurt others — vindictively and persistently — that he perceived as harming his own image. As a child my dad would always tell me, “Never judge a person until you walked a mile in his shoes.” And if someone was snippy or rude to him, he’d be extra kind back. Kindness is not just for when a person is being good to you.

5. In a world of intensive, hyper-parenting, make sure your kid knows that he doesn’t have to be the best at everything, no matter what the cost. It’s important for kids to have goals, to work hard toward them, and to experience authentic achievement and feedback. But it shouldn’t come at any cost. If his goals or hobbies are interfering with how he treats others or his state of mind, then it might be time to have a conversation about why using term papers online or sleeping three hours a week is not worth the price. Effort and perseverance should not be about causing harm to yourself or others.

It’s easy to feel letdown by a person whose behavior was so shameful, who also told us that we should “live strong” in our own lives. But he now gives us an opportunity to learn from the hypocrisy, lying, and cheating of his fall from grace and to pass those lessons onto our children.