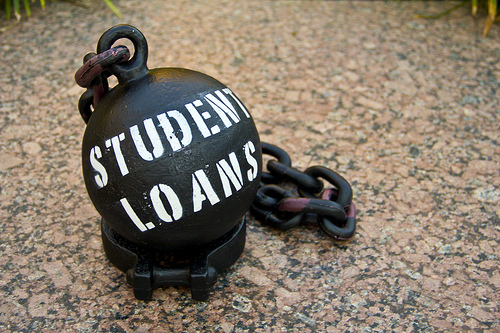 This is not really a political post.  I don’t care if you’re a Democrat, Republican, Tea Party activist, Green Party member, anarchist… Whatever your political or philosophical beliefs about the role of government in our lives, there is one issue that — as an educator, as a researcher, as a new mom, as a holder of student debt, and as a first-generation college student — I’m intensely passionate about: the rising costs of higher education and the national travesty that is our student loan system.

It sounds like a boring topic, and if your college days are long over — or you never went to college in the first place — and right now your kids are too little to imagine them in freshman dorms, it may sound like a cause that is not relevant to your present concerns as a parent. But today’s (and tomorrow’s) kids are facing a far different world of higher education than mine (Generation X) did.  I graduated from college in the mid/late 1990s, and since 1999, student loan debt has increased 511%. Yes, that’s not a mistake.  511%, dwarfing the growth in all other forms of household and individual debt.

This financial and educational path is unsustainable.  Student loan debt is an issue critical for your child’s future, for our country’s economic future and security, and for the future of the American dream of educational opportunity and upward mobility.

Because I’ve been living and breathing this stuff for so many years — student debt and educational costs are such important parts of my own life story and of the stories of the students that I interviewed for my dissertation — all of these facts have become repetitious to me.  But I’m sure they’re not known to most Americans, or I would like to believe that there would be more national outrage.

Here are a few facts:

1.  Our students’ collective student debt now totals more than $1 trillion, more than any other type of debt.  Researchers have concluded that this debt will soon have a significant damaging effect on our economy, as more and more individuals aren’t able to secure home and car loans or take any form of financial risks, such as starting new businesses. This “ripple effect” will be felt throughout all parts of the U.S. economy, from the retirement sector to the housing industry.

2.  The percentages of all Americans who hold student debt is skyrocketing, as well as the total amount of debt held by each individual and the number of defaults on those loans.

3.  College costs, meanwhile, have risen by a staggering amount, with estimates of about 1,120% over the past 30 years.

President Obama during the past few weeks, as well as other legislators such as Speaker John Boener and Senator Elizabeth Warren, have put the student loan crisis at the top of the national conversation.  Why? Because if Congress doesn’t take action by July 1, federal student loan rates will double.  We could be cynical, and think that their motivations are to gain political advantage by stoking the anger of millions of angry young people.  And that’s probably at least partially true.  But I’m also a political optimist and would like to think that some of Obama’s outrage over this issue is his own personal history of being burdened by student loans and of feeling afraid that the same path of upward mobility may be blocked for other kids from scrappy backgrounds.  There’s reason for genuine political debate about this issue because neither side has all the answers.

For the time being, let’s view this imminent student loan crisis as an opportunity.  You are going to be hearing a lot about student loans on the news during the coming weeks.  Predictably, the politicians in Washington on both sides of the political aisle are going to argue about it until we’re all sick of hearing about it.

What can you do about it?  Make your voice heard.  Because it matters for all of our kids, even if your “kid” is a newborn.  (Especially if your children are small).  Educate yourself on which type of plan for addressing this crisis makes the most sense to you, and demand that politicians take action.

Will the increase in student loan rates affect your family?  How have student loans affected you?  Do you have any other ideas about how to make your voice heard on this issue?