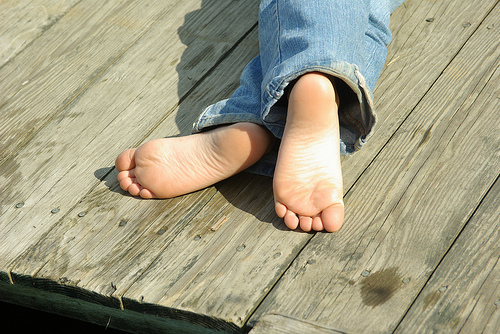 Do you know what the “summer slide” is?

No, it’s not a piece of playground equipment.  It’s the fact that kids on average return to school in the fall after summer vacation a full month behind where they were in the spring.  For lots of kids, those already far behind, the “slide” sets the stage for lasting problems in school.  Kids who have more advantages will spend their summers at sleepaway camps, at classes in museums and libraries, on family vacations, at enrichment activities, and exploring their neighborhoods.  Kids without resources will sit behind television screens, inactive and bored, not exploring their neighborhoods because they aren’t safe.

What do you remember about summer vacation?  Sprinklers?  Summer camp?  Long afternoons of hanging out in yards and play grounds?  As a kid, summer meant freedom from routines and structure.  Here are my favorite summertime memories:

3.  Afternoon swims in the river:  jumping off rocks and riding down rapids in an inner tube

For many kids across the country, those seemingly endless months of free time and fun — or even summer jobs or chores — may be a thing of the past.  But for how many kids is this type of summer a reality?

Here in New York, there was vigorous debate this winter about a proposal by Governor Andrew Cuomo to extend the school schedule.  According to Cuomo, our current schedule is based on an agricultural society that has no relevance to 21st century family and economic realities, as well as our global competitiveness.

Supporters of changing the school calendar want either to stretch the current calendar (180 days) across the entire academic year– lengthening winter and other breaks and shortening summer vacation — or add more school days to the calendar.  Others want to lengthen the school day.  So far, five states have begun plans to add 300 hours to their school calendars.  1000 districts have already experimented with new schedule models, while others, such as Las Vegas, have gone back to the traditional schedule.

Supporters of more time in school cite many advantages, including:

Help for working families:  Most families now have at least one parent working outside the home.  Parents are forced to find creative solutions for long unsupervised summer breaks, such as babysitters and camps.

Help for poor children:  Disadvantaged children could have more time for academic support and to bridge the racial and class gaps in school performance.  They could also be provided access to nutritional meals and emotional support for more days of the year.

A well-rounded curriculum.  As budget cuts and a focus on standardized tests gut arts, sciences, and physical education programs, more time during the school day could provide a richer school experience for most kids.

Opponents also find many problems with these proposals:

Added expense to already stretched budgets with no clear academic benefits.  Many question the research about the effects of additional time in the academic year, pointing out that high-performing countries such as Finland have less school than Americans do.  And added quantity of schooling may do nothing to improve the quality of American education.

Family time with children.  Many families oppose shortening summer because they argue that it is the only extended time during the year to plan summer vacations and to focus on subjects outside of the school curriculum.

Economic consequences. Much of the American tourist economy is built around the family summer travel season.

This is one of those educational issues that I’m torn about.  For disadvantaged kids, an extended school year or structured programs during the summer may mean the difference between success in school and a continued pattern of underachievement.

But I just can’t wrap my head around the idea of changing summer vacation as we know it.  But am I being nostalgic for my memories of summer that for many — if not most — kids today simply does not exist?  Are our memories of summer keeping us from doing better for many of our kids as a country?

What do you think?  Should summer vacation be shortened?  What is the true “purpose” of summer?