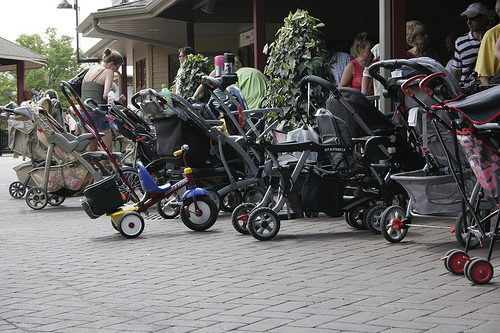 This is the first piece in a series of posts for my Summer Parenting Book Club For Parents Who Don’t Join Book Clubs And Who Hate Most Parenting Books.

The two books that I’ll be writing about are One and Only: The Freedom of Having an Only Child, and the Joy of Being One

by Lauren Sandler and Parenting Without Borders: Surprising Lessons Parents Around the World Can Teach Us

I wrote today’s post after reading the chapter in Parenting Without Borders called “Buy Buy Baby:  Why Are We Drowning in Stuff?”

For the next month I’ll be writing — hopefully along with some other bloggers — one post per week about each book.  You can read along, or don’t read at all.  Both books raise so many issues that are fascinating to write and think about.  I’ll also be giving away copies of each book for readers:  Enter the giveaway by commenting about any post.  I want to hear your comments, and maybe you’ll get a great book out of it!

For me, it all started with the stroller.

When I first found out that I was pregnant, the most visible sign that I was about to enter a new world of babies that I saw around my neighborhood in Cambridge, Massachusetts was the tricked out, hipster stroller.  They were everywhere.  In the park, in Trader’s Joe’s, in the library.  Where had all these strollers come from?  Bugaboos, Uppas, Stokkes.

For an urban mom, I decided that the perfect urban stroller was an essential.  This would be my primary form of transportation with the baby on Cambridge’s cobblestone sidewalks and during its snowy winters.  Then I saw the prices.  These strollers cost more than my first car!  How could I justify that kind of expense? And even if I could, how would I determine which stroller would work best for us?

So I did what any self-respecting 21st century expecting mom would do: go to the internet. And consulted lists and websites, such as Lucie’s List.  A few friends also recommended the book, Baby Bargains.

As my waistline expanded during my pregnancy, so did my list of “essentials” that were absolutely necessary to purchase for the baby.   Repeating the pattern that started with shopping for a stroller, I realized that I knew nothing about what babies needed — or at least what most big box baby retailers were telling me that he needed.

I’m not normally much of a shopper.  I hate clothes shopping.  I don’t spend any time browsing for home decor items.  I’m not into kitchen accessories.  I don’t even like buying shoes.  I’ve always known that I don’t need the newest or fanciest things to be happy.  (As a doctoral student in sociology in the 1990s, one of my academic heroines was Juliet Schor, who has written about the commercialization of childhood and American consumerism eloquently for decades.)

So why did I become a compulsive comparison shopper once I became pregnant and then after my son was born?   It’s simple:  Because I was afraid that this stuff might really matter.  Maybe one thing on my list would make parenthood a little easier and my baby a little happier, a little healthier, and little smarter.  What if this one particular white noise machine would make the difference between a well-rested baby and one who was not?  What if an Ergo baby carrier would make my son more content during the day while we ran errands?  What if he cried all the time and the only thing that would make him stop was a swing with soft padded seats or even a bouncy seat?  What if he got sick from the germs on a shopping cart?

Until I started reading Parenting Without Borders: Surprising Lessons Parents Around the World Can Teach Us

, I hadn’t recently thought of my brief period of crazy baby consumerism as an American trait.  I confess:  I bought the baby flashcards (would they help my son learn to recognize nouns faster?); I bought an entire play room of flashing and musical toys (would they stimulate his desire for play?); I bought push toys, ride-on toys, and walkers (wasn’t he a bit slow to start walking independently?)  But, I reasoned, weren’t the parents in Japan, in Finland, in France, doing the same thing?

Somewhere around the time my son turned 14 or 15 months, I got bored with all the baby stuff. (Not coincidentally, this was when I went back to working on my dissertation for most of my days.)

My reasons were  partially selfish because keeping up on all the latest toys and clothes and gizmos was too time-consuming and boring for me.

It also turns out that I was wrong about other cultures doing the same things I was.  And I was wrong that all this stuff was going to help my son and his development.  As Gross-Loh describes, other cultures have figured out that buying lots of stuff for your kids is not even good for kids in the first place.  By the time that American kids grow old enough to articulate their own wants, they grow used to getting more, more, more stuff.  They have long lists of toys and possessions that they want (or feel that they need).

But other cultures, such as Japan, described in more detail in the book, have found ways to acquire less stuff, appreciate what they have, and get kids to occupy themselves contentedly with creative, everyday items.

Kids are not born with the desire for the newest game, this season’s doll, or the best bike. As Gross-Loh explains, “Kids learn to get hooked on the novelty of acquiring things when this is what they’re used to.  They’re not born addicted to constant acquisition.”  In short, they learn from us.

The thing about American parenting is that there are so many choices, from our parenting styles to our car seat to formula brands.  For me, it’s hard to turn that drive off because there’s always the fear that I’m not doing it right — which brand, which style is the best for my son?  I’m learning to turn it off, slowly, one shopping trip at at time. (And, yes, I did buy my extravagent UppaBaby Vista stroller.  Used, from Craigslist, for less than half the retail price.  It’s fantastic and that thing has clocked so many miles that the wheel treads are almost gone.)

Have you found yourself questioning how much you buy for your kids?  How have your spending habits changed when you had a family?