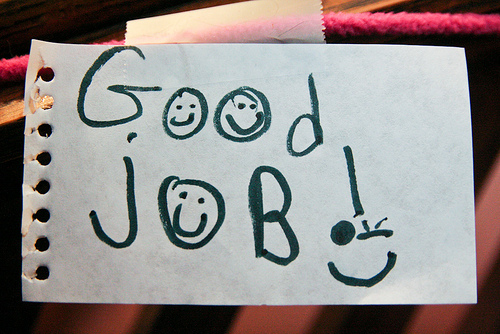 Welcome to the latest installment of our Parenting Blog Carnival:  Around the World in Six Weeks! Until I had my son, I would have been proud to describe myself using a few titles:  a scholar of resilience, an advocate for adversity, an educator who cultivates self-efficacy rather than self-esteem.

For more than a decade and a half, since my first years of teaching, I’ve been a proponent of stopping the insanity in our culture of overpraising children.  Halt the madness, I would tell anyone who would listen:  Let’s view failure and adversity as opportunities for growth and learning and let’s stop telling kids that everything they do is wonderful, special, and proof of their innate goodness and intelligence.  It’s even the main theme of my dissertation about the experiences of urban kids who go on to excel at elite New England boarding schools.

Then I became a parent.  And I don’t feel like I deserve those titles anymore.

I’ve written about how — despite my training as a teacher, despite my academic research interests in resilience and effort, despite my obsession in the media about this subject — I became a “praise junkie” with my toddler.  I became that mom on the playground whose son looked up expectantly, waiting for her claps and cheers when he went down the slide (for the 300th time).  That mom who said, “Good job!” and gave hugs and kisses for everything that her son did.  And I couldn’t stop myself.  I really couldn’t.  After writing that post about praise, I tried, really hard.

What happened to me, that teacher who became increasingly stingy with praise as her years of teaching experience mounted?  I was a warm, calm teacher, but I rarely praised my students. In fact, over the years, I noticed that my students worked harder, had a stronger connection with me, respected me more, and respected each other when I modeled the fact that effort, perseverance  and the ability to learn from mistakes are the most important qualities in a student.  Because I wasn’t constantly telling them that they were smart, wonderful, and good, they knew that what I said mattered, that I really and truly meant it when I told them that I was proud of them when they did something.

So I was thrilled when I saw that there was a chapter on self-esteem and praise in Christine Gross-Loh’s book Parenting Without Borders: Surprising Lessons Parents Around the World Can Teach Us

I was hoping that a cross-cultural perspective would inspire me reclaim my teacher instincts, as a parent.  Even though I’ve read a lot of the research literature in this area, I was confused about how to apply it to my own experience as the parent of a very young child.

It made sense to me that other cultures do not put as much emphasis on the idea of “self-esteem.”  They value humility and the obligation of parents to provide accurate (often critical) feedback as a tool for children to judge their own actions and performance.  But, again, as with the cross-cultural perspectives on sleep and eating, I wasn’t sure how much this knowledge about other parents around the world would help me, a purely American parent with purely American values living in an American community.

But I actually think that I learned a few things that are not difficult for an American parent to put into practice that might help me get rid of my overpraising habit, or at least mitigate its effects.

1.  Put your kids to work even if they’re really little.  Gross-Loh points to a Japanese saying, “Heavy work in youth makes for a quiet age.”  Basically, kids who have to work hard and face challenges through their own experiences very early in life are better off.  While American parents typically show love by doing things for their kids, Gross-Loh describes how parents in other cultures show their love by having their children do things by and for themselves.  They are responsible for their own possessions, have to get from destination to destination on their own, and find out things by themselves.

2.  Teach your kids the habit of self-reflection and of attentiveness about how any person can always improve.  Other cultures put more of a value on self-improvement, rather than only achievement, and they are better at accepting and talking about both success and failure.  Model for your kids how you talk about your own failures and what you learn from them.  And don’t be afraid to talk openly with your kids about what they’re not doing well, as well as what they do well.

3. Teach your kid about the the idea of “grit” at any early age.  I’ve written about “grit” before, and I think it’s such a useful concept for parents and educators.  Use that word as the ultimate compliment — being “gritty” — in your household.  Americans seem to have this idea that everyone is born with unique talents and gifts that must be celebrated.  Other cultures aren’t so fascinated by prodigies or individual, innate talent; they believe that traits are cultivated through hard work.  “Grit” is the ability to persist at a goal and be passionate about it, despite boredom or setbacks.  From my observations, this is what American kids often lack: the belief that mastery comes through perserverance, not raw ability.  I’ve seen as a teacher how convincing a kid that success comes through hard work, not intelligence or talent that you’re born with, can be entirely transformative to their academic lives.

Most of all, the part from from Gross-Loh’s chapter on self-esteem that I will most remember is the experience of a teacher in a Boston suburb.  She — like I did as a teacher — had grown tired of all the overpraising of kids in the name of self-esteem.  As a teacher, she knows that self-esteem isn’t grown from parents constantly telling you that you’re wonderful but is instead developed through working and persisting through challenges.

And what haunts me is her quote about the message that we parents might be giving to our children along with our praise and overconcern about self-esteem.  I wonder, Is this what my son will believe?

“[The] constant stream of praise has had the paradoxical effect of convincing a child, ‘I must be pretty weak and useless; otherwise, why does my parent spend so much energy trying to convince me of the opposite?”

This is the latest post in our Around the World in Six Weeks: A Parenting Blog Carnival.  Have you read our posts on American parenting and co-sleeping, consumerism, and food?  Join us in two weeks for our next topic from Parenting Without Borders: Surprising Lessons Parents Around the World Can Teach Us!

And check out the posts from the other fantastic bloggers joining me in this Carnival:

“Is Your Child in the Gifted Program?” by Stephanie (Mommy, For Real)

“Which Is More Important: Intelligence or Resilience?” by Deb (Urban Moo Cow)

And welcome to our second Stephanie from When Crazy Meets Exhaustion.  Check out her post, “Don’t Let Your Kid Become An Arrogant A-hole”