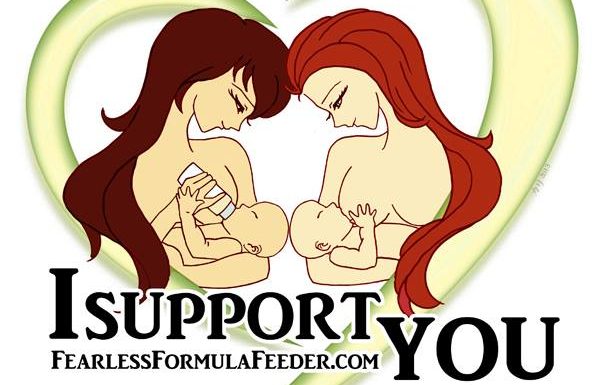 Moms across the country are standing up and saying, “I Support You!”

We’re joining Suzanne from Fearless Formula Feeder, Kim from Mama By the Bay, and Jamie from I Am Not the Babysitter to say that we know that we all lead different lives but we all share wanting the best for our children and your children.  No matter what your feeding choices. No matter what your experiences.  No matter how much you agonized over those choices and what’s best for your family.  If you’re breastfeeding your toddler in a crowded park.  Or if you’re bottle-feeding your newborn quietly in a rocking chair.  This campaign is about saying,

We know you love your children and want what’s best for them. You know what’s right for your family better than anyone else.

No mother should feel ashamed or judged because of the ways that she chooses to feed her baby. As part of this campaign, I did an interview with Nicole, a British blogger from Evidence-Based Tits and Teeth.

I formula-fed my baby beginning at about six weeks or so.  (Here’s my full story, Nicole’s interview with me on her blog, and my guest post on Suzanne’s Fearless Formula Feeder.) He had allergies and reflux, and breastfeeding was difficult, to say the least.  I was interested — and a little anxious — to hear Nicole’s story.  Some part of me wondered if I would feel guilty — for not persisting in my breastfeeding attempts — after hearing Nicole’s story.  And I know that’s exactly the opposite of the message of the campaign.

After e-mailing with her and doing our interview, no, I certainly do not feel judged by Nicole.  I’m thrilled that this campaign has given me a chance to get to know someone a little bit that I wouldn’t have otherwise met and whose experiences have been so different from mine.  I hope Nicole and I can carry on the conversation about supporting women with each other and on our blogs.  Join us!

Here’s my interview with Nicole:

JESSICA:  Please share a brief summary of your feeding experience.

NICOLE:  I managed to breastfeed both my children – my first up to twelve months and my second from source to eleven months then expressed and decanted until he was fifteen months.  I use the word “managed” because both had completely different but equally challenging starts ranging from bleeding nipples, mastitis and oversupply to a terrible latch, milk protein intolerance and biting!  If it wasn’t for my local breastfeeding support group, I would have quit after a few weeks with my first and second.
JESSICA: What was your original plan for feeding your child, and how did that compare to what you ultimately ended up doing?
NICOLE:  My first I thought I would breastfeed to 6 months then wean onto solids and a bottle.  She always point blank refused a bottle which meant I breastfed for a lot longer than I expected to.  With my second I felt pressure to breastfeed to twelve months to make it fair but was a little bit more relaxed about using formula which unfortunately did have an effect on my supply (due to not having a brilliant latch so milk transfer was not as effective as it could have been) and did result in a cow’s milk protein intolerance. However, I found that I didn’t have to be festigious about eliminated dairy from my diet and it only seemed to be milk and yoghurt I had to avoid.
JESSICA: What was the best part about how you fed your child?  What was the worst?
NICOLE: The convenience was definitely the best part.  My husband always had random ideas like, “let’s go hiking!” so not having to worry about making up feeds and taking them with us was brilliant – we could still be spontaneous.  I’m lazy by nature so not having to get out of bed at night, as I co-slept, was also a big bonus for me, although it didn’t feel like it during growth spurts!  The worst part was feeling trapped like I did with my first.  Due to never taking a bottle, beaker, cup, etc, I was solely responsible for the ‘liquid’ part of her diet post 6 months and felt overwhelmed by it at times. I do think I was exceptionally neurotic and uptight with my first which didn’t help.  I felt so much more relaxed with my second and due to him taking a bottle when I returned to work at four months, it felt easier knowing I had a choice.  Unfortunately though, he transferred his love of chewing the bottle teats to my nipples which ended feeding direct source quite quickly!
JESSICA:  What myths about how you fed your child were the most hurtful?  What is your “truth” that counteracts those myths?
NICOLE: I always struggled with being labelled an “earth mother” for breastfeeding.  This may sound a bit pathetic but, I found, it was always said with such patronisation and felt derogatory.  “Gluten for punishment” came up a lot too.  I never liked feeling ‘superior’ and there are quite a large number of self righteous, egos that seemed to think that breastfeeding made them better than everyone else.  The “truth” for me was that I enjoyed it and it just felt right.  I wasn’t superior for breastfeeding, I was lucky to have had the support to enabled me to continue.
JESSICA:  What would help you (or would have helped you) to feel supported/understood in your choices?
I felt as supported as I could have been by my husband, immediate family and my local support group.  Extended members of my family though were less encouraging and actually made me feel so self conscious that I fed my daughter in the car rather than ’embarrass’ them with my feeding methods.  Nothing anyone can do will change their negative attitudes to breastfeeding but perhaps educating people of what effect their attitude has would be useful.  Just this week I have been involved in a campaign to enlighten establishment owners in the local area that still asking new mums to cover up, feed in the toilet, or leave, when breastfeeding in public due to the ‘offence’ it causes (even though 9 times out of 10 I bet they don’t even notice).  Not only is illegal but can have such a profound effect on their confidence that it can be a detriment to their feeding journey.
JESSICA:   Think ten, twenty years into the future.  If you could give your grown child one message about how they choose to feed their child what would it be?
Trust your gut.  It’s the hardest thing to do as a new mum but you really do know best.  I just hope that when it’s their time to make the decision about how to feed their children, breastfeeding will be normal, the milk bank donor system will have improved and support groups for all mothers despite their feeding methods will exist.  To feel unsupported as a new mother is the loneliest feeling in the world.
Nicole is a dental hygienist, a volunteer breastfeeding peer supporter and blogger in Devon, England.  The basic premise of her blog is to be evidence-based on both dental topics and breastfeeding, which overlap more than you would think, with a bit of parental anecdote thrown in for good measure.  She can be found at her blog Evidence-Based Tits and Teeth and on Facebook. She does a Monday blog post called Happy Medium Monday highlighting every type of feeding stories.  She would love to hear from more mums that formula feed.  You can share your story with her at evidencebasedtitsandteeth @gmail.com.