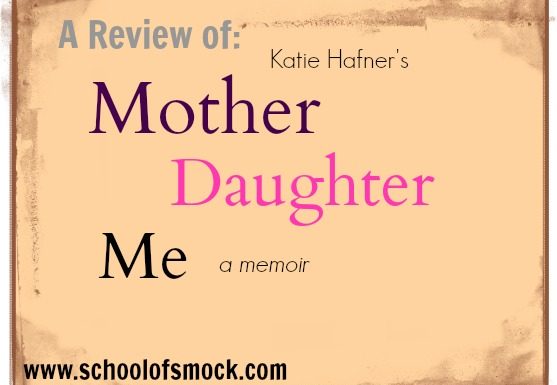 There are some books that unexpectedly touch us. We are moved, and then we move on. There are others that knock us over, striking nerves that we didn’t even know that we had.

For me, Mother Daughter Me: A Memoir

by Katie Hafner was one of the former types of books.

It caused me to think about questions — about family, obligations, resentments, parenting, grief — that I didn’t know that I wanted answers to.

I’m so used to wondering (and, yes, worrying) about my parenting in terms of questions about my son’s moods, sleeping, learning, and physical health. But what if there are much deeper unanswerable questions?

On the face of things, I didn’t think that I would have much in common with the author or her story. The memoir is about her unsuccessful “experiment in multigenerational living”: sharing a San Francisco home with her teenage daughter and her aging mother.

But yet it’s also about baggage — the emotional baggage from our childhoods that we all carry with us whether we acknowledge it or not, whether we’ve addressed those bags or not. And it’s about how the wounds of the past — large and small — can sneak their way into the next generations.  Most of all, do we need to confront our childhood hurts and grievances in order to move on, for the sake of ourselves and our children?

There are no easy answers from this story. Hafner starts off this cohabitation experiment with good intentions.

She writes, “For my part, I was guided by a combination of love, protectiveness, and, as I would eventually come to see, magical thinking. I believed we were as close to the mother-daughter ideal as two women could be… I told myself I had long since put any lingering anger about my childhood behind me, that I had taken the ultimate high road. And I had little tolerance for those who harbored bitterness toward their own mothers for transgressions far less serious than those my sister, Sarah, and I had had to endure. With a transcendant eye, I now see that it’s far easier to imagine a future we can invent than to reckon honestly with a painful past.”

And it was quite a past that she endured due to alcoholism, divorce, neglect, and her mother’s eventual loss of custody of her and her sister. It was a childhood that would be difficult for anyone to forgive and forget. Yet Hafner believes that she has done exactly that, until her mother’s  selfish behavior in the present and turbulent relationship with Hafner’s daughter causes them to try therapy (also unsuccessfully) for the first time.

After reading this book, I am forced to wonder — and I think many readers also will — whether I have done an adequate job of addressing the past. Although my early years were not marked by the sorts of unendurably difficult abandonment and dislocations that Hafner’s was, my childhood was in fact hard… sometimes.

I had two loving parents, but I can relate to much of her story of alcoholism, substance abuse, and family conflicts. There were wounds — deep ones — that partially led to my own anorexia during my college years. But there was also joy and love. Enough joy and love so that when my dying father during his last weeks of battling cancer said to me, both of us crying, “Just remember the good times,” I knew exactly what he meant and felt that I could honor that request, putting aside my own resentments to focus on happy times. At that moment, there was no need to say more, to confront those more unpleasant memories.

But am I kidding myself, like Hafner discovered? Is it inevitable — a universal truth of all families — for the wounds of the parents to be passed on to their children?

Hafner doesn’t answer that question directly. But she says that she has let go to her idealized version of her mother, the one whose attention that she has struggled for her whole life. She and her mom continue to embark on a healing journey. She finally accepts her mother’s limitations and it’s enough that her mother “can look her past mistakes square in the eye and express contrition in a way that also makes her daughter feel something approaching unburdened love, even pride.”

Mother Daughter Me: A Memoir

is a story of hurt, pain, and fractured bonds but also one of healing in the face of forgiveness and deep love.

Do you think the wounds of the past can ever truly go away?