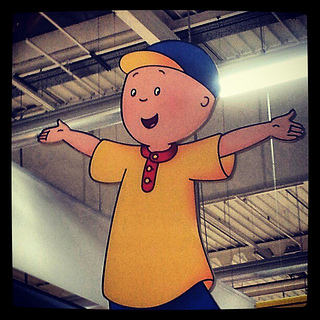 “A whiny, entitled, clingy little person [who will] lay waste to your household,” according to one critic.

“He makes adult childbearing women become infertile. He is probably the reason why kittens die,” says another.

One parent calls him an “inexplicably bald child with the worst voice in the history of mankind” with “a plan to ruin America.”

One of my blogger friends, Kristi from Finding Ninee, even made up her own lyrics based on the show’s theme song entitled, “I’m Just a Kid Who Sucks” (and who apparently has no nipples).

Who is the source of all this rage, hate, and frustration? Is it a traitor to our nation’s deepest secrets? Is he a criminal mastermind trapped in a child’s body? Is he a terrorist, a fatal contagion, or a source for passing on destructive morals? Well, depending on whom you ask, he may be all of these things, but he’s better known as Caillou, that “kid who’s four” who each day grows some more.

You see, I started off like all of you, not impressed at all by the show, and didn’t understand why my two year old son was riveted the second that it came on the screen. Overnight my son became obsessed with Caillou, his cat Gilbert, and all of Caillou’s friends. (In fact, nearly every stuffed animal in our house is now named Gilbert.) I just didn’t get it. The show seemed boring at best and grating, to put it kindly.

But then I read a review copy of one of the best parenting books that I’ve ever read (which is being published tomorrow, Feb. 18): “How Toddlers Thrive: What Parents Can Do Today for Children Ages 2-5 to Plant the Seeds of Lifelong Success“

by Dr. Tovah Klein, the Director of the Barnard College Center for Toddler Development. (Am I a bad mom of a toddler if the thought of working with toddlers all day, every day, for years makes me break out in hives?)

I had so many insights about my son while reading this book. Not just an understanding of why my son’s toddlerhood is a source of joy and wonder but why any given day can also contain many cries of frustration and exhaustion (for both of us). And maybe I’m also starting to understand Caillou and why my son likes watching him so much.

“They seem carefree and secure one minute, playing with confidence, and afraid of their own shadows the next, fiercely clinging to our leg. They want to stay glued to our sides, seemingly helpless and completely dependent one day, and then push us away in fierce independence the next, yelling, ‘I can do it myself!’ They act like big kids one moment, feeding and dressing themselves, being polite — and then are helpless babies the next… They are laughing and full of joy one moment, and whining and in a full meltdown the next because of a simple ‘no’.”

Does this mystifyingly paradoxical behavior sound familiar? If you’re the parent of a toddler, it sure is. And, also, if you’ve happened to endure an episode of Caillou, alongside your enthralled child. (Many of us would consider Caillou more of a “preschooler” rather than a toddler. However, according to Klein, the developmental tasks and patterns of toddlerdom are similar from age two to five.)

Maybe your kid and mine like Caillou so much because they see themselves and their perspective on the world.

What I took away from the book is that there is a reason for toddlers’ (such as Caillou)  irrational, self-centered, and rude behavior: their brains’ hard wiring. Their thinking is very different than adults’. Fundamentally, they are not miniature adults who rationalize and conceptualize the world the same way that we do. Not only are they inherently ego-centric without the capacity for the  rational, empathetic decision-making of adults, they also live in a “timeless” world with no adult conception of the consequences of time. This is why threats (based on consequences about what will happen outside of the present) — “If you don’t clean up your room, we won’t go to the zoo tomorrow” — rarely work with toddlers.

Toddlers Are Not Trying To Drive You Insane

Toddlers are not purposively manipulative, despite how their whininess, clinginess, and tantrums are perceived by adults. They are often overwhelmed little creatures who crave predictability, routine, and love for them to safe and less anxious.

The book doesn’t have a lot of one-size-fits-all solutions. Instead, I was left with a deep, research-based reassurance that my child’s seemingly inexplicable behavior is normal and even a sign that he is happy and well-adjusted. It’s hard mental work being a toddler. Their brains are literally exploding with new insights, connections, and challenges.

Yes, my son often seems like a whiny brat. But then in a snap he just wants his mommy’s snuggles. Yes, even putting on my son’s coat in the morning can feel like an endless battle. But then a few minutes later he beams at me when he’s puts on his own boots and declares, “I do it myself!” According to Klein, all of this — the struggles, the need for affection and independence, the fears — are not only normal but expected.

A lot of the criticisms about Caillou’s parents and their parenting style relate to why they don’t “crack down” on Caillou’s maddening behavior. But maybe those two mild-mannered Canadians are actually doing something right. Caillou’s parents are loving, patient, and calm. (Certainly more so than I am… And, yes, I know the theories that his parents are actually heavily medicated or drugged.) They’re providing for their son just what Dr. Klein has found from her research to be the most important key to healthy development: a safe, loving, and secure home base from which to explore the world. Toddlers don’t need “discipline” or “manners” because their minds don’t work that way yet. They learn by how we talk to them and how we act around them.

Switch Your Mindset About Toddlers

Dr. Klein asks parents to switch their perspectives when caring for their toddlers. Instead of judging their behavior from an adult perspective, try to interpret their reactions and feelings from a toddler point of view. In my home, for instance, this book has made me completely rethink our morning routine. Until I tried Klein’s techniques and reimagined our morning routine from my son’s perspective, the period of time from when we woke him up in his crib until he arrived at preschool was a nightmare: tantrums, crying, clinginess, defiance. I understand now how difficult and scary transitions can be for toddlers, especially when they involve separation from their primary caregivers. We now give him a lot more time, a lot more patience, and far more cuddles instead of chiding him for his slowness and fears. And it really works.

So let’s check back with Caillou and his family in 10 years. I predict that he’ll be doing just fine.

Let’s just hope that he grows some hair.

And if you have a toddler in your life — or will in the future — I urge you to pick up a copy of How Toddlers Thrive. (For all of you Sex and the City fanatics, the book includes a foreword by Carrie herself, Sarah Jessica Parker, who is a huge fan of Dr. Klein’s toddler philosophy.)

Have I changed your mind a little bit about Caillou? What questions do you have about your toddler’s behavior?