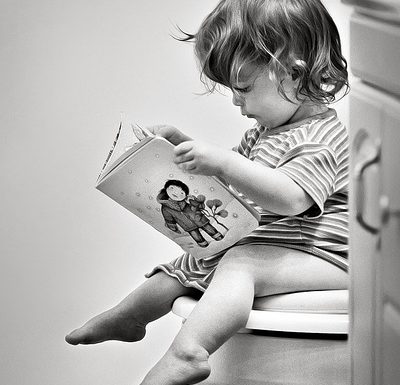 I don’t want to talk about “poop” yet with my son.

Am I being a “slacker” mom because I don’t want to think about potty training my 21 month old?

According to a new longitudinal study of Vietnamese babies and their moms, babies can be potty trained at a much younger age than I ever imagined.  These babies were mostly out of diapers at nine months old… And they started the potty training process at three months old.

Three months?  How in the world did they do this?  To put it simply, high expectations, consistent routines and communication.

Starting in early infancy, mothers make a special whistling sound while holding the baby over a potty.  When their children were newborns, mothers began examining their babies carefully for the signals — facial, sound, or behavioral — they made if they were urinating.  They learned the times of day that their child was most likely to need to use the potty and set a schedule of whistling and returning to the potty.  Within several months, all of the infants had learned that the whistling sound indicated that it was potty time.  They also learned to sit on the potty on their own.

Because this was a qualitative — or interview — study, the researchers were able to understand in more depth how the women communicated their expectations to these babies.  The mothers described an elaborate, ongoing two-way communication process between mother and child.  According to the study, the Vietnamese women “were convinced that it was good for their child to learn bladder and bowel control as early as possible, and they were proud to teach them this process.”

At the same time, Western parents begin potty training at later and later ages, often waiting until three or four.  According to most American clinicians and the American Academy of Pediatrics, parents are encouraged to begin toilet training when toddlers begin to show signs of “toilet readiness,” involving several psychological and motor developmental milestones that should be reached.  What accounts for these cultural differences?

Do you think American parents are just so worn out from all the emotional, health, and academic factors that parents have to think about today that they just don’t have the emotional energy or time left to think about potty training at such a young age?

When did you potty train your kid?  Did you wait for signs of “readiness” or did you initiate it on your own?